Fittingly the last match of the 2017 summer series was held at Western Pools on Canal and Weir, a great complex and two really top waters. At stake the Andy Anderson Memorial trophy and the small mater of the club championship, two anglers where separated by 1 point both producing some first class angling this year, Roy Boardman trailing Eric Thomas by the 1 point pulled peg 17 canal from the draw bag not the best peg on the complex especially with pegs 19 and 20 in the same section, Eric also drew on Canal peg 8 so the race well and truly on.

As the match panned out 4 of the top 5 weights came off Weir but it was Eric Thomas with 63lb who took the match, the club championship and finally got his hands on the Andy Anderson memorial Trophy. 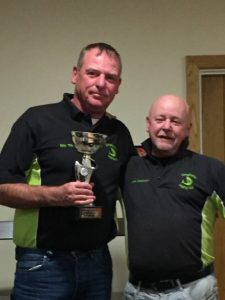 Eric is a very fitting winner I know he has wanted this trophy since its introduction to the clubs calendar.

The end of another great summer series, each year the standard gets better and better, I would like to thank each and every member for their continued support, the club the committee and Mr Brian Robinson thank you.

full results and final placings are on the clubs web site

No Replies to "Andy Anderson memorial 2017"

Got something to say? Cancel reply